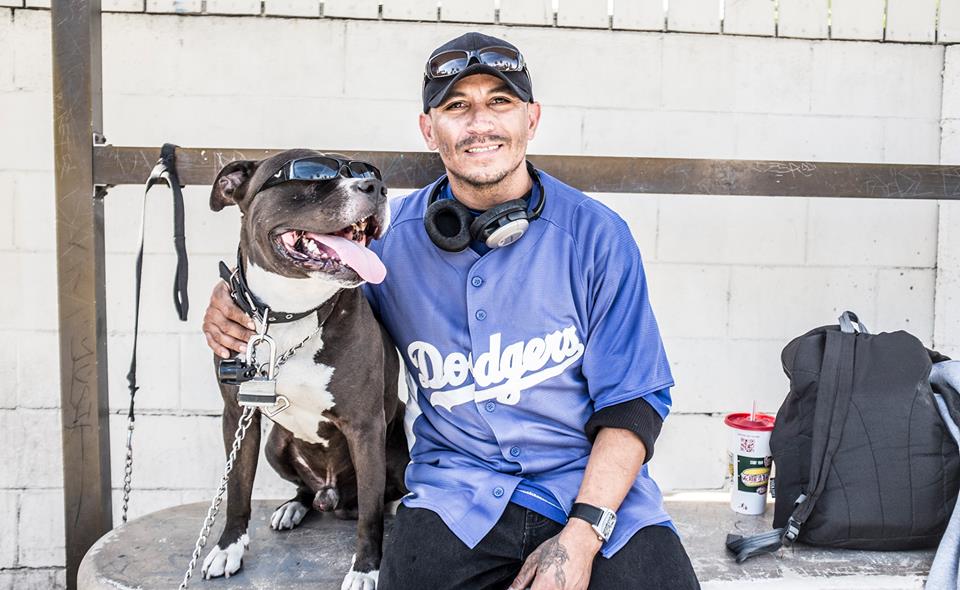 While I was driving through West Covina, I saw this man and his dog sitting at a bus stop. I pulled my car over at the next block and walked over to them. I found out that he and his dog were homeless. He told me, “Times are tough, and I’m down and out right now. I work at a warehouse, but it’s been kinda slow lately. I’m pretty much homeless because of him (pointing to his dog). Places I can afford won’t rent to me because they don’t like pit bulls, and I’m never gonna abandon him.” He went on to say, “People think pit bulls are mean, but it’s the way you raise them. I’ve seen friends slap their dogs around, keep them on a chain all day. But I raised Duke like my own kid, and he’s the sweetest dog; he won’t hurt anyone.”
I could see just how much David loves his dog. He told me they’ve been inseparable since Duke was a puppy. David takes him everywhere with him, even to a Dodgers game on a special day they allowed fans to bring their dogs. As we chatted, people walking by would see Duke wearing David’s sunglasses and smiled and laughed. Others stopped to pet Duke or shake his paw. Before I said goodbye, I gave David a care package made by one of my friends, a bunch of energy bars, and my Dodgers jersey, which he was really stoked about. He gave me a hug and said, “I really appreciate all this…God is gonna really bless you, man.” I said, “David, take good care of yourself, my friend,” and he replied, “Don’t worry, brother, (looking at Duke) we got each other.”