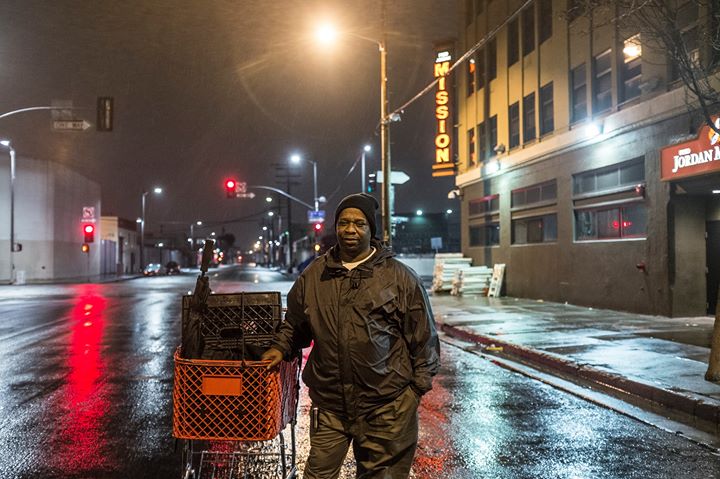 I met Harvey while he was lugging his shopping cart loaded with glass bottles, aluminum cans, plastics, and metal scraps. It was raining hard, so I offered to buy him a warm meal. He asked me if I didn’t mind coming with him to the recycle center first, so I followed him there. I watched him unload all his recyclables onto the weighing machine. He earned $6.96, all in a day’s work. I noticed he had a bad cough. He thinks he got sick from waking up soaking wet the past few mornings due to the recent storm. The heavy rain has been seeping through his tent. He didn’t seem to let it get to him, though. “I’ve survived far worse.”
He grew up in Louisiana and was there when Hurricane Katrina ravaged through his town. “I thank God I’m alive,” he told me. “I know a lot of people who died.” Before we went to get something to eat, we went to the drugstore to get some NyQuil and cough drops. I said we could get whatever he wanted to eat, and of course, being from Louisiana, Harvey wanted fried catfish and shrimp. So we went to a seafood restaurant just on the edge of Skid Row.

I learned a lot more about his past, “I wasn’t no angel,” he said, showing me gunshot wounds and places he’d been stabbed. He found some stability in his life–until his wife left him for another man. That’s when things went downhill. He started drinking heavily, and his life fell apart. Hitting rock bottom, he became homeless. Being out in Skid Row, he’s done a lot of soul-searching and realized he needs to get his life back together again. He hopes to make it back to Louisiana, reconnect with his family, and go back to work as an overnight stocker at a supermarket. “Next time you come out here, you might not see anymore, John.” As I gave him a care package, I said, “That’s a good thing, Harvey. That means you’re on your way back home.”