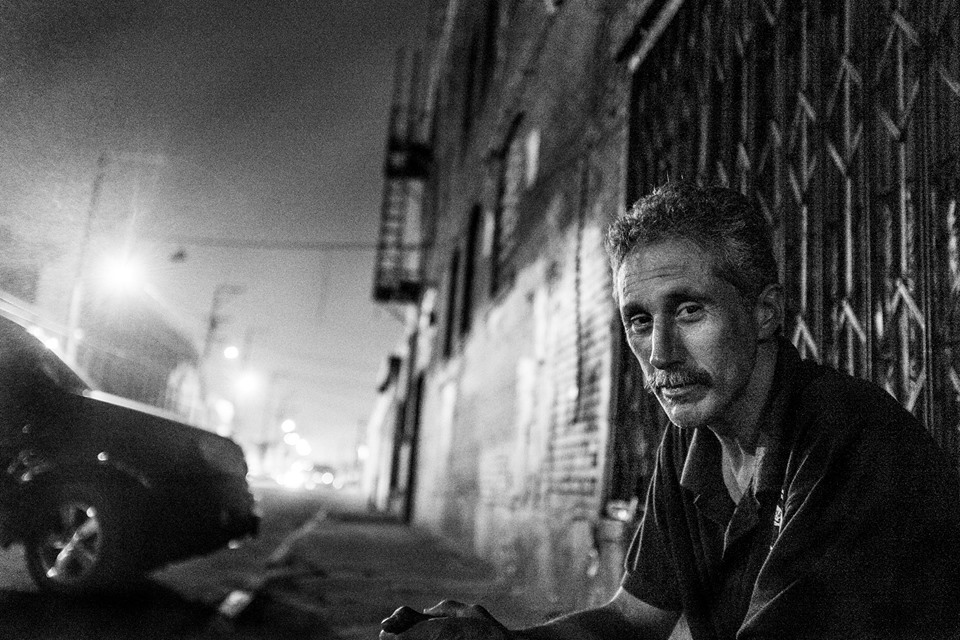 He sat alone in the dark alley. It was late at night and the shelters were closed for him to shower so he used women’s perfume that he found on the ground to spray himself. He had just finished a 21 hour work day. He can easily work over 120 hours a week doing 3 different valet parking jobs. “I have a compulsive personality” he told me. Daniel doesn’t have a home to go to. He sleeps on a staircase or sometimes at the parking lot kiosk where he works and keeps his valet shirts. “I don’t like sleeping on the sidewalks in Skid Row because there are used needles everywhere from heroin users, and I don’t want to get poked while I am sleeping.” He grew up in Echo Park, before gentrification. When it was overrun by gangs. Most of his friends were in a gang, the woman who would later become his wife was in a gang. One of his friends handed him a gun and urged him to join the neighborhood gang, but Daniel refused. At 16, he got his first taste of crack cocaine and he was hooked. Now he is 46 years old. He seemed to be a man full of regrets and disappointment. “What have I done with my life?” he asks himself everyday. But addiction can be a powerful dragon that can’t be easily slayed. He would work insane number of hours for months, then disappear for weeks on end. Going off alone somewhere to get strung out on drugs. Talking with him, I found Daniel to have a very likable personality. He’s genuine, honest, and polite. I sat with him in the dark alley for a while and he seemed to really appreciate the company. I gave him a blanket, clothes, socks, and some toiletries. Then he went to the staircase to sleep so he can get up 3 hours later to go to work again.