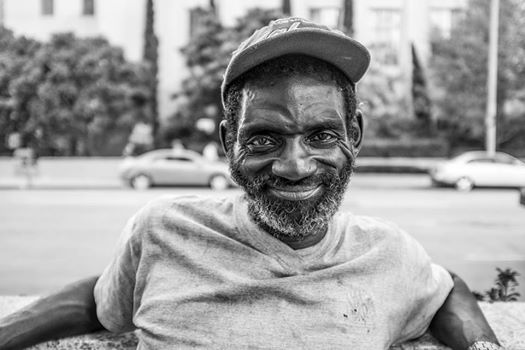 My beautiful friend Walter. Since he doesn’t panhandle or beg, he is constantly walking around looking for recyclables. I spent a few hours walking around with him, going from dumpster to dumpster, checking out various alleyways. His feet were swollen and hurting because he was wearing ill fitted shoes that he found in the trash. So we went to look for a shoe store, but it wasn’t easy to find a store that sold size 14 shoes. Along the way, he let me push his cart. He smiled and laughed watching me like he was seeing his son riding a bike for the first time. Then he took control of the shopping cart again and said “it’s ok John, I’ve been doing this for a long time.” But I still held the cart from the front.
As he was shuffling along, he smiled and waved at his many friends. People seemed so glad to see him. Occasionally he would stop, go through the assortment of stuff in his cart and give random trinkets as gifts. After going to about 6 different stores, we finally found a place that sold shoes his size (for only 10 dollars). He knew I didn’t have a good day earlier at work, so we sat on the bench and he listened to me as well as encourage me. Then as we were leaving, he gave me some money so that I can buy myself something delicious to eat. He wouldn’t take no for an answer, so I accepted it and gave him a hug. I love this man.