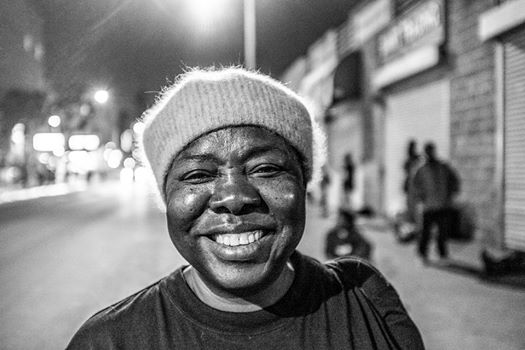 She was rummaging through the trash looking for recyclables while singing gospel songs in Korean. Eva is homeless and tonight she found a old usable blanket among the trash to sleep on. “God is good” she says with a big smile. Nothing seems to deter her joy. She’s been assaulted multiple times while staying on the street, she has to look through piles of trash all day to make a living. But she feels that there is a reason why she is on Skid Row. Eva grew up in Tanzania. When she was young she had a vision to help the poor and marginalized. So she sold everything she owned and moved to the neighboring country of Congo. While she was there Congo was going through a major civil war. It was so brutal that it became the bloodiest war in African history. She saw famine, rape, and countless atrocities. But she stayed for almost 20 years to help the people to provide relief and give them hope. A few years ago she had an opportunity to come to the US, with only 300 dollars in her pocket she found a Korean church that she made her home. That’s where she learned to read and speak Korean. Even though she experienced so much on the streets, it doesn’t take away her faith or her joy. She wants to be a light in Skid Row, to help others find hope. So if you ever run into a sweet Tanzanian woman singing songs in Korean on the street, just know that it’s really just an angel in disguise.